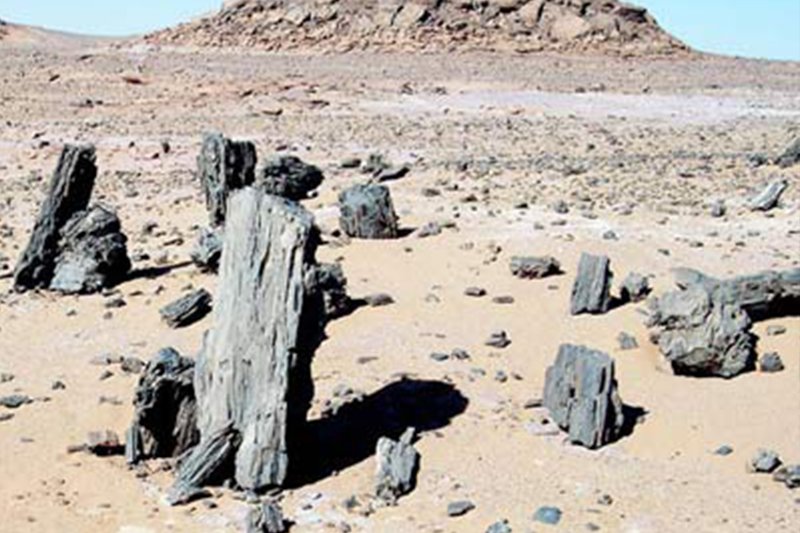 While the surface of this piece of land is covered with the fossilized remains, more natural treasures lie deep under the ground. As mentioned before, these natural artifacts have been in the making for approximately 35 million years.

There are different theories as to the origins of the forest, most of which propagate that the waters, of either one of the old branches of the river Nile or the Red Sea, carried these trees from various other places and they ended up in this “forest.” There, they eventually became fossilized through various natural processes in which the trees’ organic components mixed with dissolved silica of the area’s ground water. According to scientists, molecular exchanges brought forth slow reactions that, as a result, ended up preserving the structures and forms of the wood.

The site’s tree trunks also hold the remains and ecocide sediments in which one can see invertebrate fossils. The area’s features change slightly with the change of seasons as, after the infrequent springing rains of Cairo’s winter and with the spring, the landscape of the area is carpeted with patches of annual plants. Other, fewer, species of plant life can be seen blooming all throughout the year.

The area contains limestone rocks of the Upper Eocene, sand, and the remains of the plant excavations of the Elegosian era.

The soil in the park is sandy soil that includes granules of various sizes and there is mixing spread over the top layers with petrified wood.

The geology of the region can be described as follows:

In this era, Egypt’s lands were subjected to a great landing movement that led to the advance of the Great Tethys Sea towards the south until it reached the governorate of Qena in the south. This sea deposited thick sea deposits that are rich in limestone rocks rich in large and accurate fossils found in the formation of Mokattam, which represents the formations of the Middle Eocene era., These formations were deposited in marine conditions of medium depth marine.

The formation of the petrified forest:

The theories explaining the origin of these fossils and stony stems differed, but most of them are collected as being transported by river water to their current gathering places and then dug them, and this is confirmed by the complete absence of any other plant residues such as leaves and fruits.

It is likely that the fossilized forest originated through the waters of one of the branches of the ancient Nile River since the ancient geological ages that carried these trees from long distances and dumped them in this place and then dug in it, so the petrified wood became a type of fossil that helps to study and record ancient life on the land in this region. Also, by studying the content of heavy metals present in the sand, it turned out that they were derived from crushing rock and the Nubian sandstone.

Composition of petrified wood in the park: -

There are two opinions to explain how fossilized wood forms a park:

The first is, that partial substitution occurred between silica and some minerals such as iron and manganese on the one hand and the woody substance on the other hand as the particles of these minerals replace the wood material partially so that the wood turns into a stone while retaining all its structural details of tissues, plant cells and annual rings, and the hematite & gothite appears especially in the red and brown ranges of petrified wood.

The second opinion, is that the silicon dioxide sand has a role in the replacement process, as it does not dissolve thousands of aerofluoric acid, and it is an acid that accompanies hot and hydrophilic terrestrial emissions that may be in the form of a volcano or a precursor to a volcano. When these waters are flooded with trees, the woody tissue will be hardened, which will become petrified wood.